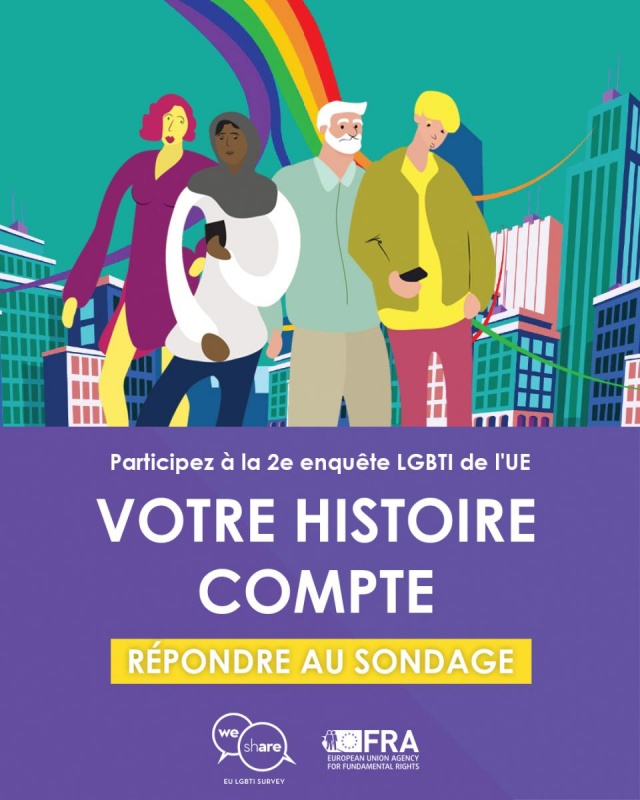 The second wave of the European survey of lesbian, gay, bisexual, trans, intersex, non-binary, and other gender non-conforming people is launched.

Besides occasional news reports aboutdiscrimination against lesbian, gay, bisexual, trans and intersex (LGBTI) people, there is very little comparable data collected across the EU about the everyday experiences of LGBTI people with respect todiscrimination.

To support equal treatment legislation and policy making, the European Union Agency for Fundamental Rights (FRA) has launched an EU-wide LGBTI survey, with a questionnaire that is available online and awaits the opinions of lesbian, gay, bisexual, trans and intersex people over the age of 15 living in the European Union, N. Macedonia or Serbia.

The participation in the survey is very important. All answers will be processed in an anonymous way ensuring that it will not be possible for anyone to identify your answers when the results are presented.

Based on the survey results, national and European policy makers as well as non-governmental or civil society organisations will be able to better target their advocacy strategies and activities to support the LGBTI community to live and express themselves freely withoutdiscrimination. In order to give weight to the results, the European LGBTI Survey counts on the participation of a large and diverse group of lesbian, gay, bisexual, trans and Intersex people from each country. This is the second wave of an EU-wide effort to collect LGBTI experiences in the framework of the ever largest survey made in this field

The survey is being commissioned by the European Union Agency for Fundamental Rights (FRA).  The implementation is done by Agilis, a statistical consultancy firm and the communication by Homo Evolution, an organisation dedicated to communication for the LGBTI community.